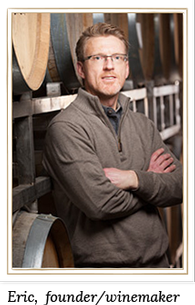 Hi! I’m Eric Eide, founder/winemaker at Aberrant Cellars, in Oregon's Willamette Valley, and this is my “Winemaker Journal.” Each month I'll share what’s happening in the vineyards, the winery, and other activities here at Aberrant Cellars. We hope you enjoy hearing about what goes into the passion and inspiration that I have for making great wine!

Since our grapes come from two regions, I’ll discuss the north and the south separately. Overall, the 2017 harvest was a very successful one for us.

The grapes that we received from our northern vineyards, in Willamette Valley, arrived about two weeks later than average. Some were even a little bit later than that. The exception to this was the Chardonnay, which was the first variety that we pulled in this year. It arrived at our winery on September 30. This is our first time working with Chardonnay. It’s from Havlin Vineyard, located in the AVA of Van Duzer Corridor, in central Willamette Valley; and, we plan to bottle it under our Sidecar label. This Chardonnay possesses a style like Chablis – it’s got plenty of fruit and mineral characteristics. This will be a great complement, to our over-all mix of wines.

The Pinot Noir from Willamette Valley arrived beautifully ripe. The signature of the 2017 Pinot Noir from Willamette Valley will be great flavor dynamics and development, with lower potential for alcohol. This will likely be a welcome break for winemakers and consumers, from the higher-alcohol vintages we’ve seen over the last few, warm growing seasons. I expect this vintage of Pinot Noir to be light on its feet and aromatically pure. The tannins are very fine, and the acidity is fresh and balanced. There will be many fans of this vintage.

The grapes that we received from our southern vineyards, in the Rogue Valley and also the Applegate Valley (which is technically a sub-district of the Rogue Valley), had the potential to be affected by smoke from the forest fires. We had all of our grapes tested, and fortunately none of our grapes demonstrated any signs of smoke taint. The grapes we received from this region include: Cabernet Franc, Petite Sirah, Roussanne, Carménère, Malbec, and Cabernet Sauvignon.  These grapes arrived about one week later than they did in 2016. I’m extremely excited about the wines we will make from these grapes! So far, the wine is showing itself to be full, dark, intense – demonstrating varietally classic characteristics. All of them were gloriously ripe and pure, and very intense.

Carpenter Hill Vineyard Petite Sirah located in the Rogue Valley which is five miles southeast of Medford, Oregon. This vineyard has a south facing slope with 20-year-old vines and 1600 plus feet elevation.

We’re currently working on a 2016 vintage of G-Force, which is a blend that we produce under our Sidecar label. Like the 2015 vintage, the 2016 vintage will include Gamay Noir, Cabernet Franc, and a small amount of Pinot Noir. Unlike the 2015 vintage, the 2016 G-Force will also include a small amount of Malbec. The Malbec should add an element of dark richness to the wine. It will spend 12 months in barrels, and I expect it to be out in the spring of 2018.

We’re about to bottle a small lot of Gamay Noir, from Havlin Vineyard. It will spend 13 months in barrels. For the fall of 2018, we’re also working on a small lot of Cabernet Sauvignon. These grapes came from Serra Vineyards in Applegate Valley, and will spend a total of 20 months in barrels. Finally, we’re preparing to assemble a Bordeaux blend, which will include Carménère, Cabernet Sauvignon, Cabernet Franc, and Malbec. It will spend about 14 months in barrels. For each wine, I’ve carefully considered the influence of the time the wine will spend in oak, looking for the right time that will impart the most positive influence on the developing wine. Then, I rack the wine and put it into tanks, where it usually re-groups for about a month, before I bottle it.

Serra Vineyard Cabernet Sauvignon in the Applegate Valley which is a sub-district of Rogue Valley. This vineyard has 25-year-old vines, a south facing slope, 1300 feet of elevation, and it’s surrounded by the Siskiyou Mountain range.

Since the volume of fruit was a little lower than usual in 2015, we only have one single-vineyard Pinot Noir, from the Block B3 Old Vines Pinot Noir, from Chehalem Mountain Vineyard. It was warm and dry in Willamette Valley that year, and these grapes were the darkest hued and most intense of the 2014-2016 years. Of the three Pinot Noirs from 2015, this is the most masculine-styled wine. This vineyard is dry-farmed, with the vines dating back to 1968. Because the root system is so deep, the vines can thrive no matter what Mother Nature throws at them. This wine spent a little extra time in barrels and a little extra time in tanks, and then was bottled in June of 2017. It needed a little extra time, to truly showcase itself, and I’m quite pleased with the results.